April 17, 2018 | by the Office of Marketing and Communications 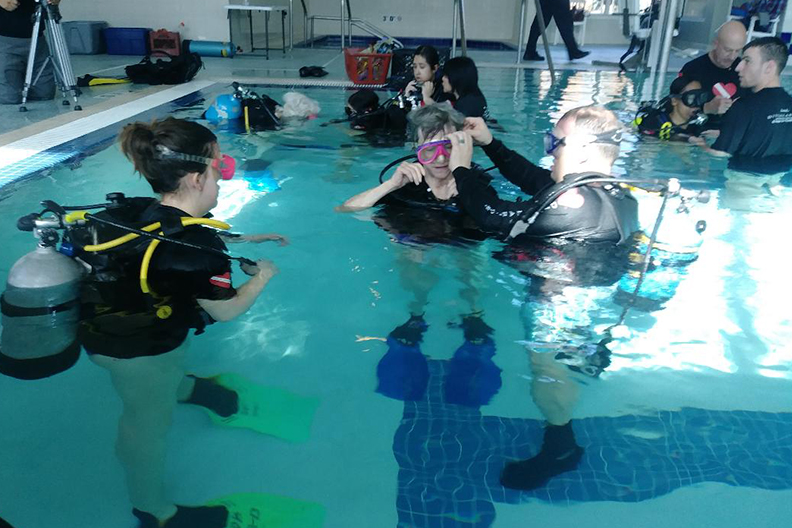 Grace Dolby recently took the plunge into scuba diving, and learned a little about herself along the way.

Dolby was one of four students in the Elmhurst Learning and Success Academy (ELSA) at Elmhurst College who took part in the introduction to scuba diving, which was held in a swimming pool at Friendship Village in Schaumburg. Residents of the retirement community have been collaborating for the last several months on a service project with students in the ELSA program, a four-year, post-secondary educational program for young adults with differing abilities.

Wearing a scuba tank and mask, Dolby paddled underwater for the length of the pool as other ELSA students cheered and provided moral support.

“I like being able to swim underwater,” said Dolby, a junior. “I’m having fun!”

A few Friendship Village residents also joined in the lesson, which was offered by Diveheart, a non-profit that uses scuba diving, scuba therapy and related activities to build self-esteem and independence for children, adults and veterans with disabilities.

Watching as the students practiced taking dips under the water, Barbara Chin, an adjunct professor in the ELSA program, said they were learning about more than just how to use the equipment.

Helen Moffett, who lives at Friendship Village, participated in the scuba lesson and took away much the same message.

“It was invigorating,” she said. “It was kind of nice to do something that I didn’t think I could do.”

The scuba lesson also was a reward for the ELSA students and some Friendship Village residents who have been working together on a service project—cutting and knotting countless plastic grocery bags into sleeping mats for homeless people. The mats, which resemble yoga mats, have been donated to homeless shelters, and clients can keep the mats when they leave, said Jeannette Magdaleno, volunteer manager at Friendship Village.

Dolby said she has enjoyed learning how to make the mats and knowing that they will bring comfort to other people. “It makes me feel good to do something for someone else,” she said.

Diving into learning new skills is what ELSA is all about, Chin said, adding that the experience inspired one of her students to come up with new words to live by.

“Her new mantra is, ‘I can do this and if don’t do it the first time, I am going to try it again,’” Chin said.

Learn more about the ELSA program