October 26, 2018 | by the Office of Marketing and Communications 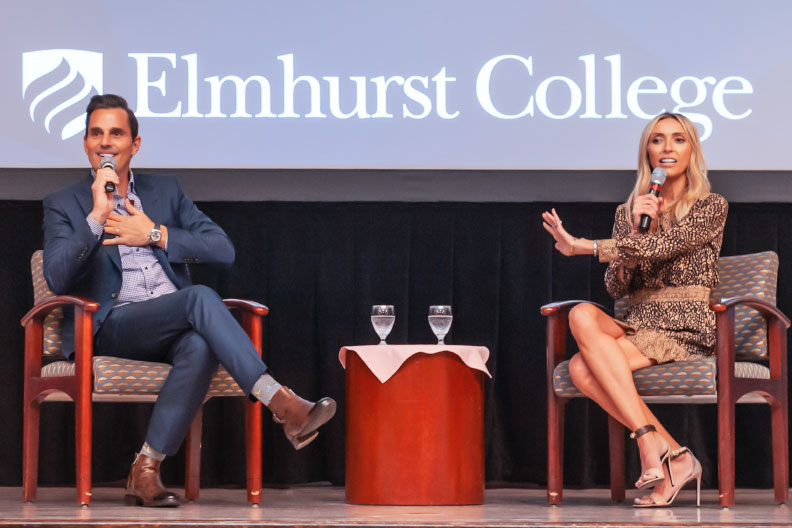 With laughter and a few tears, celebrity power couple Giuliana and Bill Rancic talked about love, marriage, and how breast cancer changed their lives during a lecture on Thursday, Oct. 25, at Elmhurst College.

The Rancics gave their talk, In Sickness and in Health … a Love Story, before an audience of more than 700 in Hammerschmidt Memorial Chapel. It was one of the featured events of the Real Bluejays Wear Pink campaign, the College’s observation of Breast Cancer Awareness Month.

Bill Rancic had recently won the first season of the reality TV series The Apprentice when he met Giuliana Rancic, then a reporter for E! News. Not long after a glamorous wedding in Italy in 2007, the two were ready to settle down to married life and kids—and their own reality TV show, Giuliana & Bill.

“We wanted to show a positive relationship, about normal people and being in love,” Giuliana Rancic said. “We didn’t think there’d be any drama.”

But then they couldn’t get pregnant, and turned to in vitro fertilization. In preparation for a third round of IVF, Giuliana Rancic was required to get a mammogram. At 34, with no family history of breast cancer and in good health, she wasn’t worried.

Then she got the diagnosis—she did have breast cancer.

“It felt like the floor disappeared and I was just falling,” she said. “My great, amazing life changed just like that.”

Bill Rancic described what it was like to be the caregiver, as the couple agonized over treatment options. “It was a very emotional time. But the most important role is to be the one who can help make decisions based on knowledge rather than emotion.”

Giuliana Rancic ultimately decided to undergo a double mastectomy. And because the couple wanted to set goals and give themselves something to look forward to, they worked with a surrogate to have a baby.

Along the way, she learned that the timing of her cancer diagnosis probably saved her life—pregnancy would have accelerated the form of cancer that she had.

Giuliana Rancic has been cancer-free for seven years. She hopes her story will inspire young women, in particular, to take charge of their health.

“Look, if it can happen to me, it can happen to anyone,” she said. “Breast cancer has a 99 percent survival rate if found early. So don’t be scared. Know your body, and if you sense something’s not right, get to the doctor and find out what’s going on. … Hardship can happen in your life, but it can turn around so fast for the better.”