September 4, 2020 | by the Office of Marketing and Communications 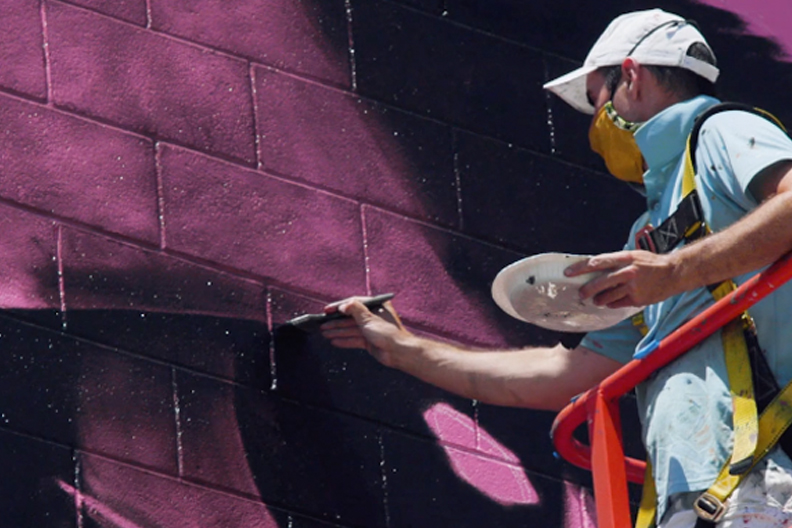 Like most of the rest of the world, Rafael Blanco spent the summer of 2020 wearing a mask and working at a safe distance from other people. Unlike many others, he spent most of that working time at the top of a boom lift, 80 feet above the ground.

An assistant professor of art at Elmhurst, Blanco was commissioned by the University of Nevada, Reno, to paint a pair of large-scale public murals on the theme of diversity and inclusion. One mural is on the side of a seven-story residence hall facing the town of Reno; the other graces a three-story wall on the School of Art. Featuring bright colors and bold images, the two public artworks make a powerful statement.

“The school wanted to make a loud statement against racism and discrimination,” noted Blanco, who earned his master of fine arts degree from UNR. “So they gave me these huge walls and asked me to make something that celebrates diversity and includes everyone.”

The larger mural features six pairs of eyes representing diverse races, genders and ages. In response to student input, he included the eyes of football star Colin Kaepernick, a UNR graduate whose refusal to stand for the national anthem helped spark the Black Lives Matter movement.

Student input also led to the inclusion of a quote from writer and poet Audre Lorde: “It is not difference which immobilizes us, but silence. And there are so many silences to be broken.”

“I felt really honored to be able to make such an important work tackling a contemporary issue,” Blanco said. “It is now more important than ever to ask these questions about race, about diversity, about gender. Are we that different from each other? Asking those questions, as an artist, is my main purpose.”

Blanco, who has also painted large-scale murals in Denver and Roseville, Calif., didn’t always plan to be an artist. A talented athlete, he came to the United States from Spain at age 19 to attend Florida Southern College on a tennis scholarship.

“It was amazing. For four years, I got everything paid,” he said. “I traveled the whole country and played tennis every day.”

For his college major, he reached back to his childhood love of drawing and chose art. At first, his art classes were secondary to his tennis career. But then his focus began to shift.

“When I came to the U.S., I was at that place in life when you are becoming an adult and you’re figuring out your passions,” he said. “My art teachers in college had a huge influence in my work and in my life, and my passion became painting.”

Today, Blanco brings that influence to his drawing and painting classes at Elmhurst.

“Being able to be part of their life at that moment is one of the things that I like most about being a college professor.”