October 28, 2020 | by the Office of Marketing and Communications 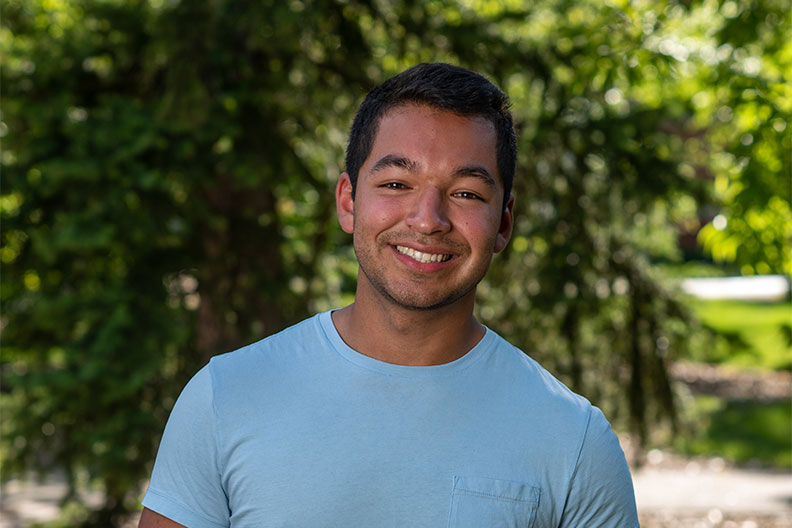 Elmhurst University senior Christopher Binder has been named a 2020 Student Laureate of The Lincoln Academy, and will be among the top students representing Illinois’ colleges and universities to be honored during a virtual ceremony next month.

The ceremony, hosted by The Lincoln Academy of Illinois, historically is held every fall at the Old State Capitol State Historic Site in Springfield. But the event will go virtual this year due to COVID-19 restrictions on large in-person gatherings.

The 46th annual Lincoln Academy Student Laureate virtual ceremony will recognize excellence in curricular and extracurricular activities by seniors from each of Illinois’ four-year, degree-granting colleges and universities, and one student from the community colleges in Illinois.

Student Laureates are selected by their individual schools. Binder, a psychology major with minors in communications, social work and coaching, is active in a number of student and campus organizations, often in leadership roles.

A four-year member of the football team, he was chosen by his peers to sit on the Blue-collar Brotherhood, the leadership council for the team. He also serves on the President’s Advisory Council for Diversity, Equity and Inclusion, and is a head resident for his residence hall. His interest in coaching and helping others is evident in his roles as a life coach to students in the Elmhurst Learning and Success Academy, as a peer advisor for incoming first-year students, and as a student ambassador in the Office of Admission. Binder also was the first recipient of the Paul Krohn Award, given to a student who epitomizes the attributes of friendliness, camaraderie and faith.

Student Laureates will receive a letter and certificate of merit signed by Gov. J. B. Pritzker, a Lincoln medallion, a challenge coin and a $500 check from The Lincoln Academy. The pre-recorded virtual ceremony will include a congratulatory statement by Gov. Pritzker, who serves as the president of The Lincoln Academy; and messages from four former Student Laureates who will speak to each of the recognized pillars of President Abraham Lincoln’s leadership: courage, empathy, honesty and integrity.

The ceremony will be available beginning on Nov. 10 at thelincolnacademyofillinois.org.

“It is a great honor to receive this award from the institution I have called home for the past four years,” Binder said. “It has been with the help, love and support of God, my family, girlfriend, friends, coaches, teachers, mentors, supervisors and all of the influential people in my life that Lincoln’s leadership pillars have been cultivated within me and given me opportunities to grow.”

After graduation, Binder plans to earn a master’s degree in social work, and then to become a high school social worker and football coach.

“My goal is to guide young people through challenging times, and to help them recognize all they are capable of by supporting and serving them,” he said.