November 24, 2015 | by the Office of Marketing and Communications 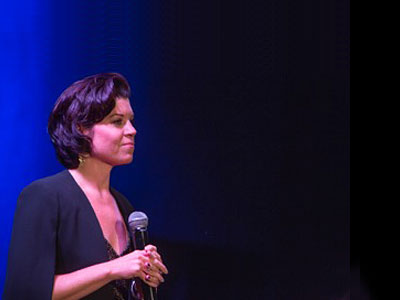 By the time Typhanie Monique arrived at Elmhurst College in 1992 to study voice and music business, she had already worked out a professional plan for herself.

“I wanted to become a smart chick singer,” Monique explained recently in her characteristically forthright style. “I wanted to really understand the business.”

Since her graduation in 1995, Monique has been busy realizing that ambition. A rising star among Chicago vocalists, she has been performing in clubs from the Gold Coast to Greenwich Village, recording with a variety of bands and collaborators and joyfully crossing the boundaries between swing and funk, pop balladry and jazz standards. The Chicago Tribune’s Howard Reich has praised her as “a potentially major artist,” and a Jazz Times review lauded her for evoking “both Sarah Vaughan and Minnie Ripperton.”

Her latest recording, Love Is, due out in spring 2016, marks a turning point for Monique. Her first outing as a solo artist leading her own band, the CD heralds her return from a hiatus she took to complete graduate study in vocal pedagogy at Northeastern Illinois University.

The project also draws on the music-business smarts Monique cultivated at Elmhurst. To make Love Is, Monique bypassed the traditional record-label route and secured funding for the CD’s production through a campaign on the online crowdsourcing platform Kickstarter. Offering premiums ranging from autographed recordings to performances at private parties, Monique raised $37,124 in pledges from fans to cover production costs. Their support gave Monique the wherewithal to pursue her musical vision.

“It allowed me to make this CD the way I wanted to make it,” she said.

Monique has already released three CDs with Chicago guitarist Neal Alger, recordings that helped establish her reputation as a versatile and original vocalist. They included covers of material as diverse as Mongo Santamaria’s “Afro Blue” and the Doors’ “Light My Fire.” The latter remains in regular rotation on one of Sirius XM satellite radio’s jazz stations. But after her last outing with Alger, a 2008 holiday recording called Yuletide Groove, Monique did something entirely unexpected: She stepped away from the stage to return to school. Monique says the move was as necessary as it was unconventional.

“I was at a high point in my career, but I needed a break” from the hustle of booking gigs and promoting her career, Monique said. “It helped to walk away from the business and get back to the creative side.”

Graduate studies also stretched Monique’s musical sensibilities. Her work in graduate school forced her to contend with classical techniques and repertoire Monique believed were a poor fit for a singer so drawn to improvisation and groove. She came to recognize that her strong sense of rhythm could interfere with the sustained tones sought by classical singers.

“It expanded my technical abilities,” Monique said of her graduate work. She is now a voice instructor at Northwestern University. “It also made me realize how much I love jazz. The art of improvising is so essential to my life.”

Typhanie Monique Coller (she turned her middle name into a stage name around the time she started performing professionally) began singing in grade school musicals in her native Stevens Point, Wisconsin. Her earliest musical influences came not from jazz, but from pop and soul. She idolized Donna Summer, and her first live concert, at age nine, was a double bill with Lionel Richie and Tina Turner. Later, at Stevens Point Area High School, Monique spent her lunch hours in the school’s music offices, exploring her teachers’ library of jazz recordings and discovering the virtuosity of Sarah Vaughan.

At Elmhurst, Monique was already displaying an unapologetically eclectic repertoire. For her senior recital, she chose both Dizzy Gillespie’s “A Night in Tunisia” and the Sister Sledge disco classic “We Are Family,” a song she remembered singing as a girl doing chores around the family home back in Stevens Point.

After her graduation from Elmhurst in 1995, Monique sang in a multitude of settings: gospel groups, wedding bands, even Lake Michigan cruise-ship combos. Her first critical notice came as vocalist in the groove-riding acid jazz ensemble Peking Turtle, which provided Monique an outlet for exploring her roots in soul and funk. Then in 2001, she joined with guitarist Alger in a collaboration that would last for seven years and produce three successful CDs. It also helped establish Monique as, in Reich’s words, “Chicago’s next major jazz artist to take flight.”

For her forthcoming CD, Monique enlisted the services of producer Jeff Levenson. When expected backing for the project failed to materialize, Monique turned to her fans for support. She launched her Kickstarter campaign last summer seeking $30,000 in pledges. Her supporters soon exceeded her goal.

“I’ve never been afraid to ask for what I needed, but this was stressful as hell,” Monique said. “There’s nothing easy about running a Kickstarter campaign.”

Increasingly, though, the job description for musical artists includes taking on booking, promotion, marketing and other aspects of the music business. With record labels throwing less support behind rising performers, rising talents like Monique have had to turn to new ways of putting their work in front of audiences. Crowdfunding creates a new kind of relationship between artists and audiences—and, Monique says, raises the stakes for performers.

“They’re participating in the creation of this project,” said Monique. “It has to be good.”

Her Kickstarter supporters are expecting no less. Recorded over a busy four-day fall weekend at Victorian Recording in Barrington, Love Is includes four Monique originals, including the title track, as well as a cover of Dinah Washington’s dolorous “This Bitter Earth” that left Monique in tears during her recording session.  She plans to celebrate the spring 2016 release of the CD with parties in Chicago and New York.

“My dreams are coming true, and you have helped get me there,” Monique wrote in a thank-you message to her fans on Kickstarter.

For this smart singer, there may yet be even bigger dreams to realize.