Paving the Way for More Minority Representation in Medicine

Marvin Carr ’15 is on the path to becoming an orthopedic surgeon. 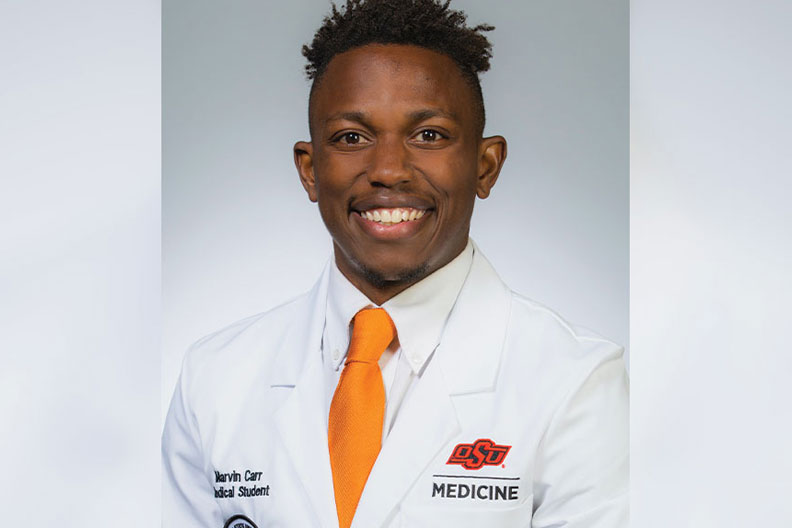 Marvin Carr ’15 had graduated from Elmhurst and was training as an EMT when he realized he wanted to be a doctor.

“We were on rotation at Northwestern Memorial Hospital, and a gunshot victim came in. The attending [physician] in the ER that night, she commanded the emergency room. She knew everyone’s role, what everyone should be doing. I just gravitated to that,” Carr says.

“It really brought me back into my playing days of football at Elmhurst, whether it’s showing that leadership or knowing how to act under intense pressure. From that point on I thought ‘OK, what can I do to get the point where she was?’”

The Chicago native moved to Tulsa, Okla., where his wife, Endya ’15, was assigned for Teach for America. He worked as a surgical assistant at a hospital while taking prerequisite classes to prepare to apply for medical school. In 2018, he began the doctor of osteopathic medicine program at Oklahoma State University.

Carr plans to be an orthopedic surgeon and can’t wait to make a tangible difference in patients’ lives. But he also wants to make a difference in the medical profession. As he begins his third year of medical school, he’ll also serve as the president of OSU’s chapter of the Student National Medical Association (SNMA), an organization committed to supporting current and future underrepresented minority medical students.

“The mission of SNMA is essentially to support underrepresented students and increase the number of culturally competent individuals practicing medicine,” Carr says.

He first learned the importance of cross-cultural understanding at Elmhurst.

OSU’s SNMA chapter runs several outreach programs in the Tulsa area. They introduce elementary school students to science and medicine. They talk to high school students about what careers in the health professions look like, and what they need to do to pursue those paths.

And they work with underrepresented college students on their journeys to medical school, advising them on what classes to take, helping them prepare for interviews and conducting clinical skills courses.

“All of these programs are geared towards ending the disparity in medicine, and just opening students’ eyes that they can do this. Representation is everything. And sometimes that may be all it takes for someone to say, I think I’m going to try this out.”

Connect With Us
Update Your Alumni Profile