Andrea Krieg wants students to understand the complexities of the criminal justice system. 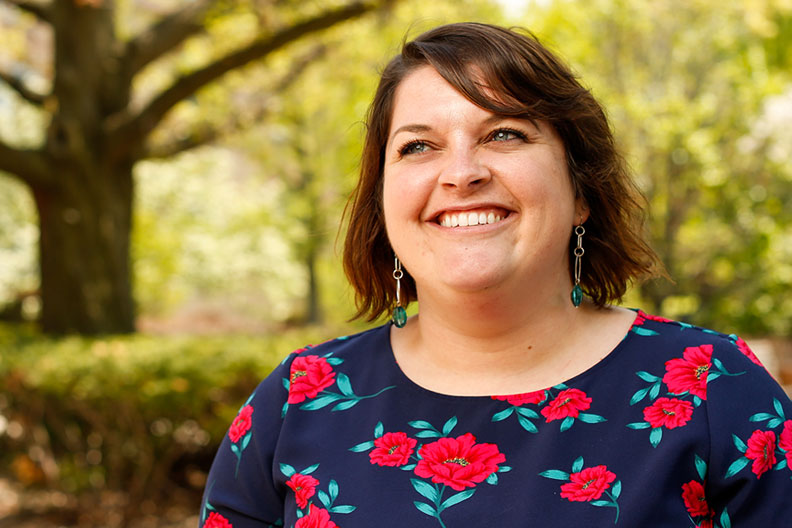 By having them look at the system through the lenses of history, race and socioeconomic inequality, she helps them develop a more complex view of crime, punishment and justice—that gray is OK.

Krieg teaches courses on gender and crime, criminal corrections, and juvenile justice and delinquency. Her research focuses on neighborhood change, and the significant impact of race on a person’s social mobility over the course of his or her entire life.

She loves introducing students to new ideas, and says the campus culture at Elmhurst encourages it. She has the flexibility to take her students on field trips, including to the old Joliet Correctional Center and the Cook County courthouse in Maywood. And she brings outside perspectives into the classroom, inviting representatives from the Illinois State Police and Chicago Police departments to speak to students.

Along the way, Krieg wants her students to gain a greater understanding of how factors like poverty and racial inequality affect the criminal justice system—and how their influence has endured for generations.

One of her students is studying the role of dollar stores in poor communities. Are they taking the place of grocery stores in neighborhoods that are considered food deserts? Are they a healthy option?

“A freshman will tend to be black and white about things, like, ‘This person did it, it is what it is, and they have to deal with the consequences,’” she says. “It’s because the criminal justice system, for so many and especially for the privileged, is hidden—they don’t see the problems because they don’t butt up against them. But by the time they’re seniors, they’ve started to realize the inequities.

“If I ask students in their senior year what they think about the system and they don’t say it’s broken or that there are real problems in it, then I didn’t do my job.”

At the same time, Krieg wants them to learn how they can help to change the system for the better, and that there are a variety of careers to equip them to do that.

For example, some criminal justice majors might start out wanting to become police officers, but come to realize that they don’t want to carry a gun. The Alpha Phi Sigma criminal justice honor society, which Krieg advises, recently hosted Beyond the Badge, an event highlighting careers that support police work and serve the community, such as victim’s advocates, dispatchers and evidence technicians.

“It’s important to broaden students’ horizons,” Krieg says, “and let them see that there are a lot of opportunities out there.”