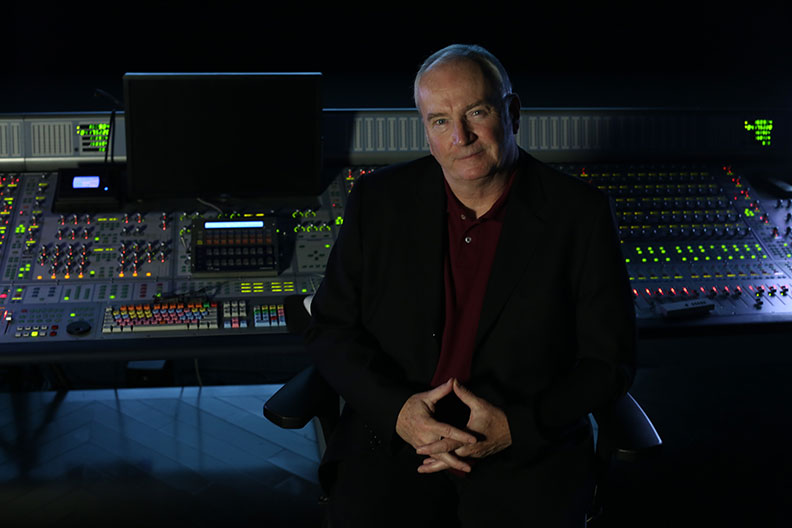 “I believe that everything that I am today was nurtured at Elmhurst College.” —Jonathan Shaw ’74

Jonathan Shaw ’74 is a gifted and successful film and television editor best known for his work on the original Twin Peaks, the iconically weird and groundbreaking TV series by the visionary director David Lynch.

Most recently, Shaw executive produced Finding Noah, a harrowing documentary about a group of biblical archeologists who climbed the 17,000-foot peak of Mount Ararat in search of the real Noah’s Ark.

But long before he was an in-demand editor and producer in Los Angeles, Shaw was a wide-eyed Elmhurst freshman from Buffalo, N.Y., unsure of what he wanted to do with his life.

“This was 1970,” says Shaw. “There was a lot going on in the wider world and in Chicago that was pretty exciting. I was still looking for that thing that was going to spark me and point me toward my future career.”

For Shaw, that spark was the arts. At Elmhurst, he took his first painting and drawing classes and remembers being awed by Elmhurst professors who were also influential and politically active Chicago artists. Muralist John Weber, founder of the Chicago Public Art Group and longtime Elmhurst professor, became an important role model and mentor.

“To be in that environment, where you’re being mentored by these active, working artists, it was tremendously exciting for me,” Shaw says. “I fell into that community. I believe that everything that I am today was nurtured at Elmhurst College.”

The idea that most resonates with Shaw from his Elmhurst days is that being an artist—whether painter, photographer or film editor—is about more than knowing how to use the equipment.

“It’s the artistic values that you create along the way,” Shaw says. “It’s having an interesting point of view and accessing that point of view to do powerful work.”

At first, Shaw gravitated toward photography, shooting rolls of film in colorful 1970s Chicago and developing the prints back in Elmhurst’s darkroom. After taking a few uninspiring photography jobs after graduation—one was shooting furniture for a catalog—he started getting more excited about movies, which offered an even bigger canvas for getting across his artistic message.

Shaw soon found himself in Florida, working odd jobs on the sets of B movies like Jaws 3-D. Then he took a night gig at a sleepy cable access station in the town of Altamonte Springs. His job was to play commercials in between broadcasts of local talk shows at 3:00 a.m.

One day a manager came in with reels of footage from the local high school graduation. “See what you can make of this,” he told Shaw, who was just starting his shift. Since he had nothing to lose—who was watching this stuff, anyway?—Shaw starting cutting together what he thought would be a really cool five-minute montage of a high school graduation. It aired the next day.

“The next night I come to work and they tell me, ‘There’s people who want to buy this. We’re getting all these calls from parents,’” Shaw says. “I was just messing around, but what I’d made actually moved people. A spark went off for me, and that’s the last time I left the editing room.”

Shaw’s big break came when he was brought in as an assistant editor on Blue Velvet, David Lynch’s 1986 hallucinogenic murder mystery featuring Isabella Rossellini, Dennis Hopper, Laura Dern and Kyle MacLachlan, who would go on to star in Twin Peaks.

Before shooting was finished in North Carolina, the lead editor’s wife had a baby and he had to go home to Los Angeles.

“For three weeks, I had this opportunity to work one-on-one with David Lynch on Blue Velvet,” Shaw says, still amazed at his good fortune. “It was crazy.”

While some young editors would have been intimidated, Shaw took the opposite tack. He took creative chances with his cut of the film, thinking that the final editing would happen thousands of miles away in LA, “so they can’t yell at me,” he said.

As it turned out, Lynch invited Shaw to come back to LA and keep working on Blue Velvet, but Shaw didn’t need to worry about getting yelled at.

“I remember a scene where David said, ‘Jonathan, that’s not what I intended at all, but that’s beautiful. I love what you did,’” Shaw says. “I learned that as an editor, there are times where the client wants it a certain way, but then another idea comes to you and you kind of go with it, and that’s how you grow.

“When you find yourself in that spot, you really can’t be afraid.”

Shaw wishes that Elmhurst had offered something like its new digital media program when he was a student. He says that digital editing and production has absolutely changed the film and TV industry. Shaw hasn’t cut actual film in 25 years.

But Shaw also encourages Elmhurst’s aspiring digital artists to look beyond gaining technical expertise with software like Avid and After Effects.

Forty-five years after graduating with a camera in his hand, Shaw says that with every new project, he draws from the deep well of experience and creativity that was filled at Elmhurst.

“I started a project yesterday and I don’t even know where to begin,” he says. “But I know I’ll find it.”

Connect With Us
Read the Alumni Magazine