May 17, 2019 | by the Office of Marketing and Communications

Updated Friday, June 14: Due to the threat of storms, Saturday’s June Jazz concert will move indoors to Hammerschmidt Memorial Chapel. The concert begins at 6:30 p.m.; doors open at 5:30 p.m.

Seating is limited, and please keep in mind that chairs, coolers, outdoor equipment, and food and beverages are not permitted in the Chapel.

Remote viewing sites will be available for those who cannot be seated in the Chapel. We apologize for the inconvenience but want to make sure that this exciting concert can be held safely. 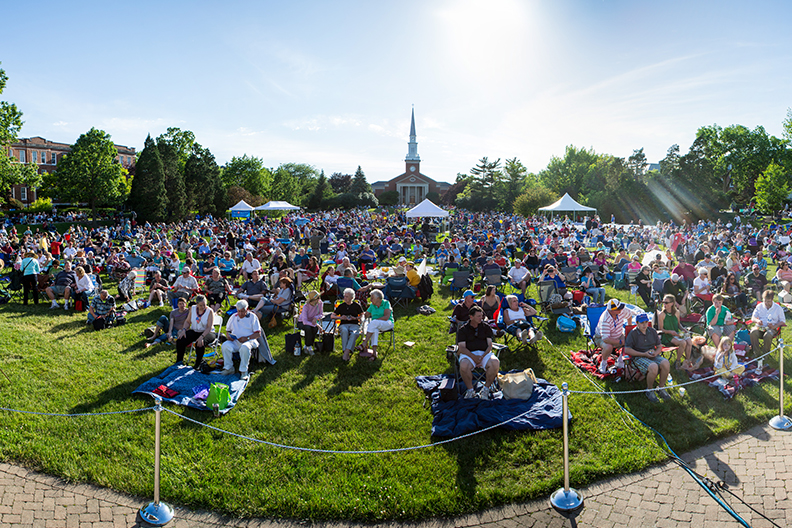 The public is invited to bring lawn chairs and picnic baskets to this free outdoor concert, which begins at 6:30 p.m. on the College Mall. Food and beverages will be available for purchase. For more information, call (630) 617-6186. This event is sponsored in part by PNC Bank.

New this year: Come out early for big fun and games before the concert! Starting at 4:30 p.m., you can play giant Jenga, checkers and bags, enjoy treats, and participate in a free raffle. All are welcome! This event is sponsored by the Elmhurst College Alumni Association.

From 1962 to 1992, Severinsen played on and led the NBC Orchestra on The Tonight Show with Johnny Carson, making it the most visible big band in America. Since the final telecast, Severinsen has continued to perform regularly around the country.

Severinsen and the Elmhurst College Jazz Band have made several joint appearances in recent years. In 2017 they performed before a standing-room-only crowd of 3,000 at the 71st Annual Midwest International Band and Orchestra Clinic in Chicago. They also performed together at the College’s June Jazz events in 2014 and 2017. And in 2016, Severinsen chose the Jazz Band to tour with him throughout Ohio. Elmhurst College awarded Severinsen with an honorary doctoral degree in 2017 for his contributions to the music world and his special connections to the College.

Under the direction of Grammy Award winner Doug Beach, the internationally acclaimed Elmhurst College Jazz Band has performed around the world and has appeared at the Montreux Jazz Festival, the Umbria Jazz Festival and many others. This summer, Beach will lead the band on a European tour, with performances at three major festivals in the Czech Republic and on stages throughout Poland and Germany.