January 10, 2020 | by the Office of Marketing and Communications 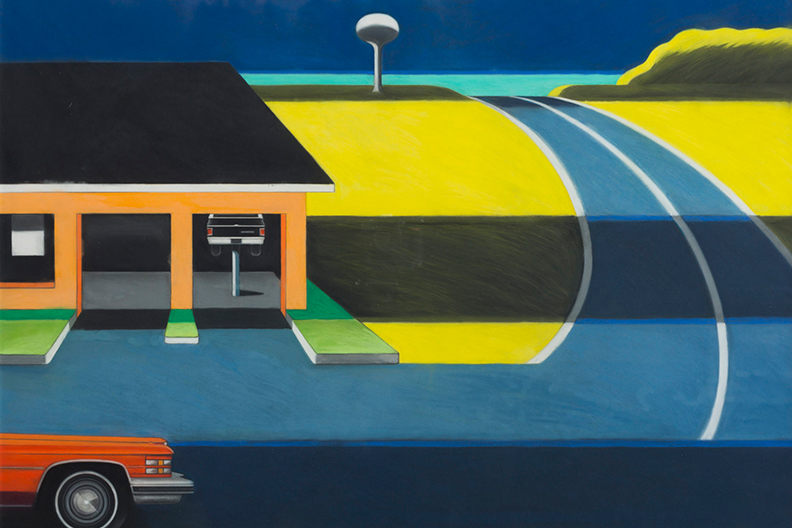 Jorgensen was an artist, Elmhurst College professor and curator of the College’s art collection for many years, and her efforts, including promoting the work of the Chicago Imagists, continue to have a major impact nationally and internationally.

But as a figure outside Chicago, her work and influence have largely been overlooked. The exhibition, on view from Jan. 25 through April 12, is dedicated to Jorgensen’s artistic accomplishments as a painter and photographer, and to her role as a major caretaker of Chicago’s cultural history.

An accomplished painter, Jorgensen worked in oil and specialized in contemporary American landscapes and still life compositions. In addition to her paintings, the exhibition includes a series of never-before-printed photos taken by Jorgensen of the Chicago Imagists in their homes and studios.

During her lifetime, Jorgensen’s work was displayed at the Art Institute of Chicago, Richard Gray Gallery and Hokin Kaufman Gallery. In 1985, a mural created by Jorgensen was commissioned by the City of Chicago for the Sulzer Regional Library and dedicated to former Chicago Mayor Harold Washington.

The mural, which illustrates ethnically diverse children in formal, geometrically shaped gardens, will be re-created for this exhibition.

“Sandra’s connoisseurship and vision were critical to the College’s art collection, as well as the formation of the Elmhurst Art Museum,” said John McKinnon, executive director of Elmhurst Art Museum. “We are proud to pay tribute to this beloved artist, friend and mentor to many, and place her work amongst the larger stories of Chicago and Midwestern artists.”

Jorgensen served on the board of the Elmhurst Fine Arts and Civic Center Foundation, the entity that helped start the Elmhurst Art Museum. As curator, Jorgensen was the driving force behind maintaining and growing the Elmhurst College art collection. In doing so, she became a major caretaker of Chicago’s cultural history, and amassed an internationally known collection now considered to be “the finest of its kind” by the late James Yood, former art critic and teacher at School of the Art Institute.

The Elmhurst Art Museum is located at 150 S. Cottage Hill Ave. in Elmhurst. The Museum is open Tuesday-Sunday from 11:00 a.m. to 5:00 p.m. Admission is free for all Elmhurst College students, faculty and staff (with their Jaypass).

The Sandra Jorgensen exhibition is sponsored by Sally J. and Raymond J. Allen, Marcia and Robert Goltermann, and Elmhurst College.