October 22, 2016 | by the Office of Marketing and Communications 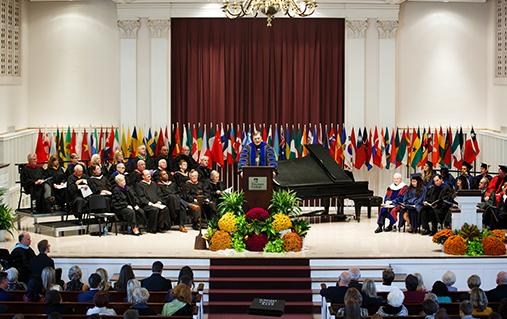 During the ceremony, which carried the theme Imagining Elmhurst, President VanAken described the College’s strengths and how they would enable the institution to not only imagine ambitious plans for the future, but also to make them a reality. To make his point, he announced $2.5 million in gifts and commitments to Elmhurst College from three trustees.

The ceremony began with representatives from the faculty, students, community and alumni offering greetings and words of welcome to President VanAken.

Elmhurst Mayor Steve Morley noted Elmhurst College’s contributions to the city’s intellectual and cultural life and added that the key to a successful relationship with President VanAken was to ensure that “whatever you’re discussing is in the best interests of the students.”

Esther Pereira ’18, president of the Student Government Association, echoed that sentiment: “Students are his first priority, and he has already begun to take steps to make sure students feel comfortable and our voices are heard.”

During his remarks, President VanAken described why the College was well-justified to be ambitious in what it imagined for the future, pointing to the College’s rich history, its academic reputation, the beauty and location of the campus, and its wealth of bright and talented students.

He also announced that three trustees of the College had made $2.5 million in gifts and commitments to Elmhurst College, including:

“Everything I have described makes me very proud to be part of the Elmhurst College community; I hope it makes you proud as well,” President VanAken said. “We have dreamed. We have imagined. Now we will roll up our sleeves and get to work. And we will make what we imagine into reality.”