May 21, 2022 | by the Office of Marketing and Communications 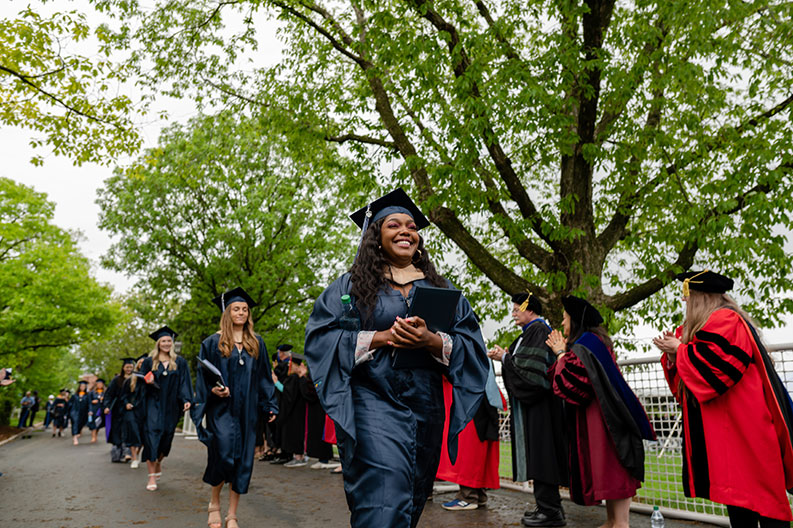 In an atmosphere that was festive despite gray skies and some afternoon rain, Elmhurst University held its 151st Commencement exercises for the Class of 2022.

On Saturday, May 21, nearly 850 undergraduate and graduate students took part in the three ceremonies held throughout the day, out of more than 1,000 Elmhurst students who earned degrees.

The commencements also marked the official end to the University’s yearlong sesquicentennial celebrations, and “the first day of our next 150 years,” President Troy D. VanAken said.

“Likewise, today marks the end of one part of your personal and educational journey, but the beginning of the next,” he told the graduates. “We applaud you for having made this important investment in yourselves and your future.”

At the morning ceremony for graduate students, master’s degrees were awarded in the fields of business, education, health care and technology.

An honorary doctoral degree was conferred on legendary jazz vocalist Dee Dee Bridgewater for her contributions to the music world and her longtime connections to the University. The three-time Grammy winner has mentored Elmhurst students and performed seven times with the Elmhurst University Jazz Band.

After accepting her honorary Doctor of Fine Arts degree, Bridgewater addressed the graduates, describing several times in her life when her carefully laid plans were upended—and the opportunities that opened up to her instead.

She urged the graduates to make big plans, but be prepared to pivot. “We can determine our world by envisioning the things we want to do, but not putting a time alignment to it,” she said. “Things happen when they happen, and you’re going to have detours.”

In her remarks, Heakin encouraged the graduates to approach their careers not just as problem solvers, but as “problem preventers,” and also to maximize every opportunity to build their financial wealth.

“I will never forget the day I called my father and said, ‘Dad, my 401(k) passed the one million dollar mark today.’ He was so proud of this milestone, because my family had lived a modest lifestyle with a tight budget,” she said. “My wish is for you to be able to make that call someday as well.”

As President VanAken congratulated the graduates, he urged them to maintain their connections to the University, and to consider how they might one day share their experience with future Elmhurst students.

“Enjoy this well-deserved time of celebration, this new beginning, and thank you for what you’ve brought to Elmhurst University,” he added. “A hearty congratulations to you, the Class of 2022!”

View the photos from the day’s events on Flickr starting Monday, May 23.