December 8, 2021 | by the Office of Marketing and Communications 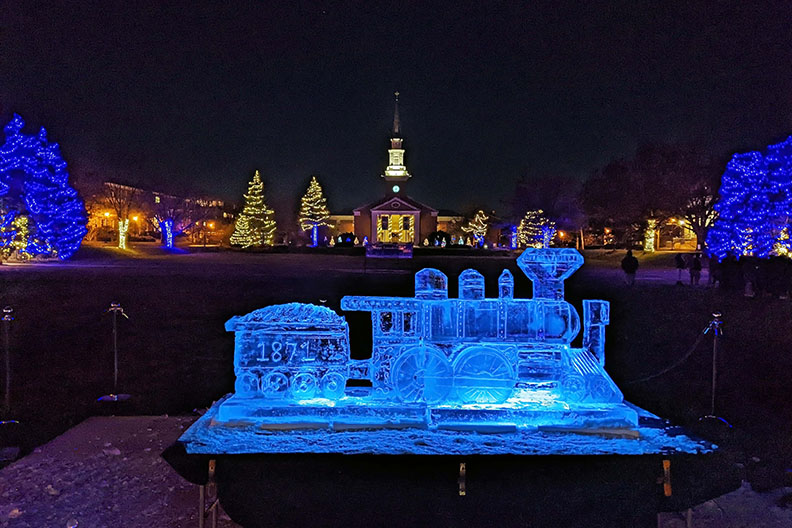 Elmhurst University has announced a record $50 million fundraising campaign to support crucial opportunities and resources that will have a lasting impact on current and future students and the University as a whole.

Elmhurst 150: The Campaign for Elmhurst University represents the largest fundraising campaign in the University’s history. Announced by President Troy D. VanAken during the University’s 150th anniversary Founders Day celebration on Monday, Dec. 6, the campaign includes money for a state-of-the-art hub for students in the health professions, renovations to athletic and recreational facilities, support for academic programs and scholarships, and more.

“The time for imagining is over. This is our time. This is our moment. This is when we take hold of our ambitious plans and make them a reality,” VanAken said Monday before a large, in-person crowd of faculty and staff, students, trustees, alumni and community leaders. About 150 remote viewers watched the announcement via livestream.

President VanAken’s announcement culminated a day of campuswide festivities celebrating the 150th anniversary of Elmhurst University’s founding on Dec. 6, 1871. Activities included a time capsule presentation, a historic re-enactment of the University’s founding, a service project, ice sculpture and sled dog demonstrations, a special holiday dinner for the students, horse-drawn trolley rides, and remarks by not only President VanAken but also by student, faculty and alumni leaders, and by Elmhurst Mayor Scott Levin.

Mayor Levin congratulated the University on its sesquicentennial, noting that its active role as an employer, cultural and educational resource, and community partner in the City of Elmhurst “is one of the things that makes our city great.”

“We’ve grown up together, we’ve supported each other, and we have historic bonds with each other,” he said. “This institution has grown into something really amazing.”

Hiba Anees ’23, president of the Student Government Association, expressed her appreciation for those who shaped the institution throughout its history.

“Today we not only celebrate, but also are reminded of what 150 years of strength, courage and love have created,” she said. “As we look back to our past, let us thank our founders and those who made Elmhurst what it is today … home.”

Elmhurst 150: The Campaign for Elmhurst University, which has a total fundraising goal of $50 million, includes four major campaign goals and projects in need of support:

Thanks to significant gifts made during the quiet phase of the campaign, the University already has raised more than $40 million, or 80 percent of the total goal. That amount derives from more than 17,000 gifts received from more than 6,200 donors.

“The point of this campaign is to shape our future,” President VanAken said. “While our goal is ambitious, we set it because we believe it’s achievable—and because it’s what we need to lay a solid foundation for Elmhurst’s future.”

To make a gift to Elmhurst 150: The Campaign for Elmhurst University, please visit elmhurst.edu/give.