June 1, 2019 | by the Office of Marketing and Communications 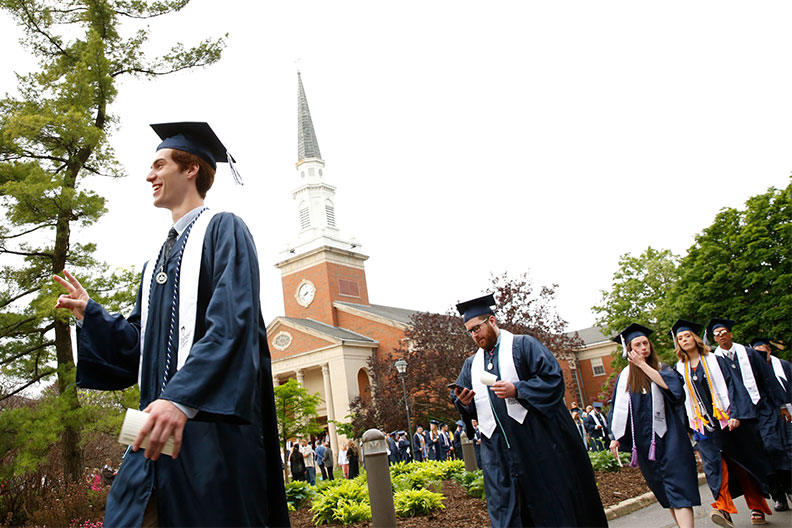 In an atmosphere that was festive despite looming clouds and an early sprinkling of rain, Elmhurst College held its 148th Commencement exercises for undergraduate students on Saturday, June 1.

A total of 754 seniors graduated with bachelor’s degrees from the College. During a separate ceremony earlier in the week, 271 graduate students received their master’s degrees.

“The fact that you are here shows you have the ability to do great things, and the potential to do even more after you leave Elmhurst and begin to forge your own paths in the world,” President Troy D. VanAken said to the graduates on Saturday.

As he congratulated them, he urged them to maintain their connections to the College, and to consider how they might one day share their experience with other Elmhurst students.

“We can’t wait to see what you’ll do next,” he said. “We know you’ll continue to make us proud.”

A number of graduates, faculty members and College leaders, including President VanAken and April Edwards, dean of the faculty, wore Bluejay First pins, signifying their status as first-generation college graduates.

An honorary doctoral degree was conferred on the Rev. Dr. Richard Stanger, a minister and scholar whose family ties to the College span 130 years and include his father, Robert, who served as Elmhurst College’s ninth president.

After accepting his Doctor of Divinity degree, Stanger spoke to the graduates about “Claiming the Power of Previously” by staying open to new experiences and taking the time to draw meaning from life’s milestones.

“May you dare to live your ‘Yes’ as your life unfolds in the years ahead, with Elmhurst College as a significant ‘Previously,’” he said.

At the ceremony for the College’s graduate students, held on May 30, master’s degrees were awarded in the fields of business, education, health care and technology.

In addition, an honorary Doctor of Humane Letters was awarded to Howard Reich, an author, filmmaker and longtime arts critic for the Chicago Tribune, who has spoken several times at the College about his work involving the Holocaust.

During his remarks to the graduate students, President VanAken noted that this year marks the 20th anniversary of graduate studies at Elmhurst College.

“When you remember that this College was founded in 1871, our graduate programs seem relatively young,” he said. “But Elmhurst’s long tradition of offering an outstanding undergraduate education enables our graduate programs to be especially relevant, agile and responsive to the rapidly changing needs of our economy—and to the students who want to succeed in it.”

As President VanAken congratulated the graduate students for attaining their master’s degrees, he also thanked them for choosing Elmhurst.

“Today belongs to you, your family and friends,” he told the graduates. “The entire Elmhurst College community is proud of you, and wishes you every success.”